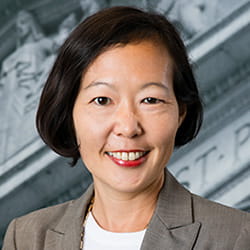 Catherine Y. Kim is a Professor of Law at Brooklyn Law School and teaches Immigration Law, Administrative Law, Anti-Discrimination Law, and Civil Procedure. Her research focuses on the role of courts and agencies as engines for social justice reform, particularly as it relates to immigrants and communities of color. Professor Kim’s scholarship has appeared or is forthcoming in the Georgetown Law Journal, the Emory Law Journal, and the Notre Dame Law Review, among others. She has authored several amicus briefs for the federal courts, including one on behalf of legal scholars in the Trump v. Hawaii litigation before the Supreme Court. She is the recipient of both the Eric K. Yamamoto Award and the James H. Chadbourn Award for her scholarship.

Professor Kim previously served as the George R. Ward Distinguished Term Professor and Associate Professor of Law with tenure at the University of North Carolina School of Law. Prior to that, she was a Staff Attorney at the American Civil Liberties Union Foundation where she litigated a range of cases relating to government policies enacted post-9/11, the school-to-prison pipeline, and the education rights of Native American children. Professor Kim earned her J.D. from Columbia Law School and her B.A. from Cornell University. She clerked for the Honorable Carlos F. Lucero on the United States Court of Appeals for the Tenth Circuit.