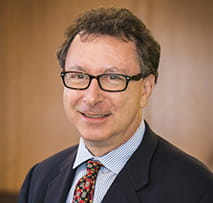 Lawrence Solan holds both a law degree and a Ph.D. in linguistics. His scholarly works are largely devoted to exploring interdisciplinary issues related to law, language and psychology, especially in the areas of statutory and contractual interpretation, the attribution of liability and blame, and linguistic evidence. He is director of the Law School's Center for the Study of Law, Language and Cognition, and his acclaimed book, The Language of Judges, is widely recognized as a seminal work on linguistic theory and legal argumentation. His most recent books are The Language of Statutes: Laws and their Interpretation, published by the University of Chicago Press in 2010, and The Oxford Handbook of Language and Law, co-edited with Peter Tiersma and published in 2012. He has authored numerous articles and book chapters, and regularly lectures in the United States and abroad.

Prior to joining the faculty in 1996, Professor Solan was a partner in the firm of Orans, Elsen and Lupert, where he specialized in complex civil litigation, before which he was a law clerk to Justice Stewart Pollock of the Supreme Court of New Jersey.