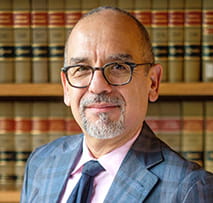 Professor Araiza’s teaching and scholarly interests focus on administrative and constitutional law. Widely published, Professor Araiza’s scholarship has appeared in NYU Law Review, Northwestern Law Review, UCLA Law Review, Penn. Journal of Constitutional Law, and Constitutional Commentary. His academic books, Enforcing the Equal Protection Clause (2016) and Animus: A Brief Introduction to Bias in the Law (2017), were both published by NYU Press. His most recent book, Rebuilding Expertise: Creating Effective and Trustworthy Regulation in an Age of Doubt, will be published by NYU Press in 2022. He has also written casebooks on First Amendment Law and Constitutional Law, both for Carolina Academic Press. Professor Araiza is a member of the American Law Institute, has served as the Chair of the Administrative Law Section of the Association of American Law Schools and on the LexisNexis Law School Publishing Advisory Board, and holds several leadership positions in the Southeastern Association of Law Schools.

He is actively involved with students, participating on panels and discussion groups about Constitutional Law and current events.

After law school, Professor Araiza clerked for Judge William Norris of the U.S. Court of Appeals for the Ninth Circuit, and then for Justice David Souter of the U.S. Supreme Court. He then practiced as an associate with two large law firms in Los Angeles. He has served as an adjunct faculty member at the University of California Los Angeles Law School and as a visiting professor at the University of California Hastings College of the Law, Washington & Lee University School of Law, Lewis & Clark Law School, and the University of Western Ontario. Prior to joining the faculty at Brooklyn Law School, Professor Araiza served as the Associate Dean for Faculty and the Rev. Richard A. Vachon, S.J. Fellow and Professor of Law at Loyola Law School Los Angeles.