We invite you to visit us and experience our campus and neighborhood first-hand. To pick up materials for admission and financial aid or to register for one of the many programs we offer prospective students, please make an appointment with the Admissions Office (Monday through Friday, 9:00am-5:00pm at 250 Joralemon Street). You may contact admitq@brooklaw.edu or (718) 780-7906.

Our on-site programs range from a casual walking tour of the campus to Experience BLS, a half-day program designed to give you an insight into our student, faculty, and academic programs. These are especially helpful for candidates who have an application pending. We also offer an opportunity for you to attend an actual class, if scheduling permits, as well as workshops, such as our Admission Strategies Workshop and BLS Infovisit, that address the essentials of admissions, financial aid options, and career opportunities.

Learn more and register for on-site programs for applicants and prospective applicants:

Brooklyn Law School offers the ultimate urban campus, uniquely situated in New York City, at the intersection of Brooklyn Heights’ beautiful historic district, the Brooklyn Civic Center, and downtown Brooklyn. The campus is at the heart of a distinctive legal, cultural, social, and visually stunning neighborhood that draws visitors from around the world to its cool communities and tree-lined streets. 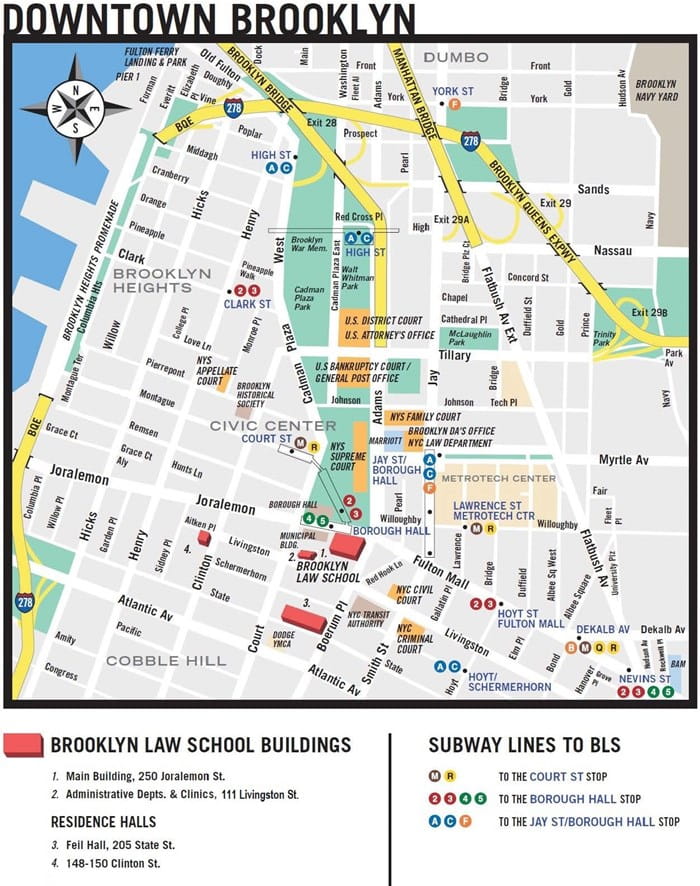 Traveling around the five boroughs of New York is best done by subway, bus, train, or taxi, and is fairly straightforward once you get your bearings. Brooklyn Law School is served by the Borough Hall transportation hub (also known as Court Street) that is adjacent to our main building and can connect you to almost any point within New York City. The station is served by the 2, 3, 4, 5 and R subway lines. The A, C, and F subway can also be accessed from stations close to the main campus.

Visit the MTA homepage to plan your trip or to learn more about subway, bus, and train fares:

New York's two main train hubs, Grand Central Station and Penn Station, serve the Amtrak National Railroad, New Jersey Transit, the Long Island Rail Road, and the New England and Hudson Valley lines from the Metro-North Railroad, as well as offer connections to the city's main airports: JFK International, La Guardia, and Newark International. An expansive subway and bus system, including the Port Authority bus terminal, connects you to all points in the tri-state area and beyond.

Below you will find detailed directions to Brooklyn Law School's Main Building (250 Joralemon Street) by car, subway, bus, and railroad:

While there are parking garages in the neighborhood close to Brooklyn Law School, most students find them unnecessary as they walk to school or commute by subway, bus, or train. However, parking can be found on an hourly, daily, or monthly basis.