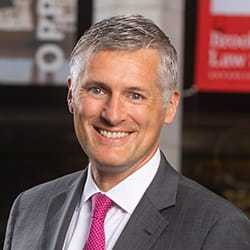 Michael T. Cahill became President and Joseph Crea Dean of Brooklyn Law School on July 1, 2019, returning from Rutgers Law School, where he had been Co-Dean and Professor of Law. Before departing in 2016 to assume the Rutgers deanship, he was a member of the Brooklyn Law faculty for 13 years. He also served Brooklyn Law School as Associate Dean for Academic Affairs (from 2010 to 2013) and as Vice Dean (from 2013 to 2015).

As dean, Cahill holds the Joseph Crea Chair in Law. He is also a tenured Professor of Law on the faculty.

Dean Cahill received J.D. (magna cum laude) and M.P.P. degrees from the University of Michigan and his B.A. from Yale University. After graduating from law school, where he was a note editor for the Michigan Law Review, he served as a law clerk to Judge James B. Loken of the U.S. Court of Appeals for the Eighth Circuit. He then was involved as staff director and consultant, respectively, for major criminal-code reform projects in the states of Illinois and Kentucky. Before joining the Brooklyn Law School faculty in 2003, Professor Cahill taught at Chicago-Kent College of Law as a visiting assistant professor of law.