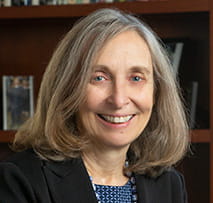 Maryellen Fullerton is Professor of Law at Brooklyn Law School. She served as Interim Dean of the Law School from July 1, 2018 to June 30, 2019.

Fullerton is an expert on asylum and refugee law. Her research focuses on comparative refugee law and the empirical and normative aspects of the worldwide effect of the Common European Asylum System. She was appointed to the Distinguished Chair in Law at the University of Trento for the 2012-2013 academic year through the U.S. Fulbright program. Fullerton’s research at the University of Trento examined and compared the laws of Italy, the European Union, and the United States as they have evolved in response to the phenomenon of forced migration. Her research highlighted the intersection of European Union asylum policy and European human rights law. Fullerton also has served as a Fulbright scholar at the University of Louvain in Belgium, as a German Marshall Fund Fellow in Budapest and as a Visiting Scholar at the Juan March Institute, Center for Advanced Studies in Social Sciences in Madrid.

She is a frequent speaker across the United States and in Europe. A prolific scholar, her most recent works include two co-authored casebooks, Forced Migration: Law and Policy and Immigration and Citizenship Law: Process and Policy, which are used by more than 100 law schools and universities throughout the United States. She is one of the founding editors of the Refugee Law Reader, a comprehensive on-line resource available in English, Spanish, French, and Russian for the rapidly evolving field of international refugee law. In addition to teaching and researching, she headed several human rights missions in Germany for Human Rights Watch. She has been a consultant for the United Nations High Commissioner for Refugees, and has been active in projects providing support to Refugee Law Clinics in Eastern Europe.

Prior to joining Brooklyn Law School’s faculty, she served as law clerk to Judge Francis Van Dusen of the U.S. Court of Appeals for the Third Circuit and to Judge Frank Johnson Jr. of the U.S. District Court for the Middle District of Alabama.