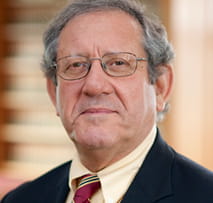 Joel Gora has been a professor at Brooklyn Law School since 1978, teaching constitutional law, civil procedure and a number of other related courses. He also served as Associate Dean for Academic Affairs from 1993-1997 and again from 2002 through 2006. He is the author of a number of books and articles dealing with First Amendment and other constitutional law issues. He is also an expert on campaign finance law matters, working in the field as both an advocate and an academic. Prior to joining the Brooklyn Law School faculty, Professor Gora was a law clerk at the United States Court of Appeals for the Second Circuit for two years after he graduated from law school, and then a full-time lawyer with the American Civil Liberties Union for almost ten years. During his ACLU career, he worked on dozens of United States Supreme Court cases, including many landmark rulings. Chief among them was the case of Buckley v. Valeo, the Court’s historic 1976 decision on the relationship between campaign finance restrictions and First Amendment rights. He has worked, on behalf of the ACLU, on almost every one of the important campaign finance cases to come before the Court. He also served for more than 25 years on the board of directors of the New York Civil Liberties Union, and as one of its general counsel. He has served as well on a number of policy committees of the New York City Bar, and was also a member of the board of the Federal Bar Council. Professor Gora received his B.A. from Pomona College and LL.B. from Columbia Law School.