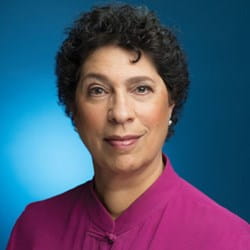 Susan Herman is the inaugural Ruth Bader Ginsburg Professor of Law. Like Ginsburg, she served as General Counsel to the American Civil Liberties Union. In October 2008, Herman was elected as the seventh President of the ACLU, a position she held until stepping down in January 2021. She teaches courses in Constitutional Law and Criminal Procedure, and seminars including Law and Literature, Terrorism and Civil Liberties, and the recent COVID-19 and the Constitution. She is affiliated with the Center for Law, Language & Cognition and is an Edward V. Sparer Public Interest Law Fellowship Committee Member.

A highly regarded authority on constitutional and criminal procedure topics, she is a prolific author in these areas. Her extensive writings have been published in scholarly and other publications, ranging from law reviews and books to periodicals and online publications. Her most recent book, Taking Liberties: The War on Terror and the Erosion of American Democracy (Oxford 2011 & 2014) was awarded the 2012 Roy C. Palmer Civil Liberties Prize. She is also author of The Right to a Speedy and Public Trial (Praeger Publishers 2006) and co-author of Terrorism, Government, and Law: National Authority and Local Autonomy in the War on Terror (Praeger 2008).

Professor Herman has discussed constitutional law issues on radio and television, including NPR, CNN, CSPAN, NBC, MSNBC, and PBS. Her opinions are frequently published in leading print media. She has been a frequent speaker at academic conferences and continuing legal education events organized by groups such as the Federal Judicial Center and the American Bar Association, and has lectured and conducted workshops for various groups of judges and lawyers. She has also spoken before non-legal groups, including the U.S. Army War College and other schools, and at international conferences such as Web Summit and Collision. She has participated in U.S. Supreme Court litigation, writing and collaborating on Supreme Court amicus curiae briefs for the ACLU on a range of constitutional criminal procedure issues, most recently in the case of Riley v. California.

Herman received her B.A. from Barnard College and J.D. from New York University School of Law, where she was a Note and Comment Editor on the NYU Law Review. Before entering teaching, she served as Pro Se Law Clerk for the U.S. Court of Appeals for the Second Circuit, and Associate Director of Prisoners’ Legal Services of New York. She has received awards honoring her accomplishments from Barnard College, Brooklyn Law School, NYU Law, and Trinity College Dublin (the Praeses Elit award), and from numerous organizations including Crain’s New York Business, the Japanese-American Bar Association, and the Coalition of Women’s Initiatives in Law (Inspiration Award).